I have worked as a lawyer, entrepreneur and investor in Canada's legal and technology industries since the early 1990s. My background includes the practice of law as a commercial lawyer with Smith Lyons (now Gowling Lafleur Henderson LLP), serving as President and CEO of Communix Corporation, a Toronto based consumer reporting agency and legal services company, and partner and counsel with McLean Watson Capital Inc. - one of Canada's prominent private venture capital funds. In 2002 I established a legal practice centering on technology companies and technology investors and in 2006 I co-founded Ross · Rumbell with my good friend Martin Ross.

Having worn the hats of lawyer, entrepreneur and venture capitalist, I have dealt with issues such as fundraising, secured debt and private equity investment, M&A, corporate reorganizations, joint ventures, technology licensing and channel agreements, employment issues, shareholder relations, domestic and international transactions etc. from a variety of perspectives. A large part of my practice involves corporate finance and assisting clients engaged in complicated negotiations. I approach my work as a creative problem solver with a reputation for getting the deal done on budget. 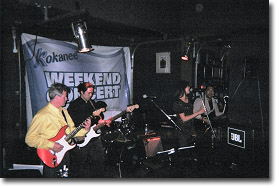 I graduated from the University of Toronto magna cum laude, and obtained an LL.B. from Osgoode Hall Law School, York University. I have two children, a wonderful wife and live in the Beach area of Toronto. When time permits I enjoy being involved in community and professional associations such as the Professional Development Committee of the Canadian Venture Capital Association, the Principal's Alumni Advisory Committee for University of Toronto at Scarborough and Kew Play, a local association formed to create a playground in Kew Garden Park in Toronto. From time to time I also play rhythm guitar in a Beatles cover band known as "The Fakes".

Like all lawyers in Ontario, I am a member of the Law Society of Upper Canada.

I can be reached at: